Jaffareadstoo is thrilled to host today's stop on the Don't Turn Around Blog Tour
with an interview the author, Amanda Brooke 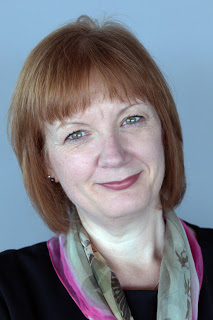 Hi Amanda, welcome back to Jaffareadstoo.

Where did you get the first flash of inspiration for Don’t Turn Around?

This idea flowed from a conversation I had with my agent and editor. We were discussing possible plot lines for my next book and the topic of confessions came up. By the end of our talk, I had this picture of someone agreeing to tell their secret but only if the other person wasn’t looking at them. It took quite a few iterations to get the story right as it was merged with another idea I had about using my experience of working on a helpline. I’m a bereaved parent and for some years I volunteered on the Child Death Helpline, providing a listening ear to those affected by the death of a child. I should point out that the fictional helpline I created as part of my story has no similarities to the types of calls I took but I was able to use some of my experience. As a volunteer, I never knew who was going to call next or indeed, whether I would ever speak to a particular caller again. This random connection is similar across many helplines and that’s what I focused on when creating a fictional helpline to help young people who couldn’t articulate their fears and needed to talk it through with someone. The helpline and the confession became the two essential ingredients that helped me create the plot for Don’t Turn Around.

Megan McCoy died from suicide and the story picks up ten years later and is told from the perspectives of Meg’s mum, Ruth and her cousin, Jen who was also Meg’s best friend. The family have tried to rebuild their lives, setting up a foundation in Meg’s name and establishing a helpline to support young people in crisis like Meg, but there are questions yet to be answered about why she died. Ruth and Jen have never understood what hold Meg’s boyfriend had over her, or why she protected him to the very end. Was the brief note she left meant to be a cryptic message or did someone destroy part of the letter before her body was discovered? The family had thought they had come to accept there would never be answers, but then a young woman phones the helpline and reveals things that only Meg could know. Eventually, a confession is made.

It’s usually the situation that comes to mind first and I develop the characters and plots as the story builds in my mind. Sometimes, as with Don’t Turn Around, I can draw upon aspects of my own experience but I also like to challenge myself by developing ideas that will require a lot more research and will stretch my imagination. I’m constantly looking out for the next flash of inspiration for a story and it can come at any time, even when I’m in the midst of writing another book. I’ve become adept at watching the world around me and constantly wondering ‘What if..?’ Occasionally it pays off.

Once I have an idea for a story, I like time to let it form in my head. The starting point is always the synopsis, which doesn’t necessarily cover sub-plots or minor characters but should give me enough to capture the essence of the story so that I can talk it through with my editor. When we’re both happy with the plot, my next task is to cut up the synopsis into about twelve sections so I have some idea how to pace the story. I usually have a clear vision of the opening and final scenes, but the rest of the book remains relatively fluid. I enjoy getting to know my characters and they’re the ones who fuel my imagination as I go along, creating situations and conflict I never could have imagined at the start.

When I first started planning Don’t Turn Around, my original intention was to write it solely from the perspective of Meg’s cousin, Jen. It’s Jen who uncovers hidden secrets about Meg when an unknown caller phones the helpline, so it seemed logical that it should be her story. However, when I was about a third of the way through the first draft I realised I needed to give Meg’s mum, Ruth a voice. It should have been an easy decision because, like Ruth, I’m a bereaved parent rebuilding my life over a decade after losing my son. However, Nathan died from cancer and I was reluctant to take on the responsibility of putting myself in the shoes of someone who had lost a child to suicide. Once I convinced myself that I needed to do it, I went back to the beginning of the book and started over. I wanted time to get to know Ruth and work out what made our stories similar and what set us apart.

What do you hope that readers will take away from Don’t Turn Around?

Having worked on the Child Death Helpline and been involved with The Alder Centre which supports bereaved parents, I’ve seen the impact suicide has on a family. Losing a child under any circumstances is devastating but it’s the stories I’ve heard from parents who have lost their child to suicide that have often stayed with me. I can’t help but wish that those sons and daughters had followed a different path, sparing their parents from the depths of grief I know all too well. Of course, life isn’t simple and someone suffering from depression or the effects of trauma won’t always appreciate the pain they leave behind, and that’s why it was important for me to set my story ten years on from Meg’s death. I wanted to illustrate the ongoing pain her mother suffered, not to mention the guilt and the constant reminder that she would never be the same without her daughter.

My next book is centred around a support group for young widows and widowers and I’m currently getting to know the three main characters who have all been widowed under the age of fifty. The story begins when the youngest and most recently bereaved of my characters joins the group. She forms close friendships with the other two characters and they each face challenges in their lives, one of which will reach crisis point and lead to a significant event. At the moment, the current draft of the story opens with a statement from the support group. It’s taken from a point in the future and reveals what that event is – so I suppose I could say what happens -but you never know what will survive the editing process so it’s better if I keep quiet.

Ten years ago, Jen’s cousin Meg killed herself after failing to escape an abusive relationship.

Now, Meg’s ex is back and Jen’s domestic abuse helpline has started getting frightening calls from a girl who knows things about Meg – details that only the dead girl or the man who hurt her could have known…

As Jen starts to uncover the past, someone is determined to stop her. Can she save this young woman from Meg’s fate? Or is history about to repeat itself?

The devastation felt by the loss of Meghan McCoy is still having repercussions ten years after her suicide. Her parents and cousin have thrown themselves into making a success of Lean On Me, a help-line which has been there to help countless young women escape their abusive partners. Lean On Me continues to be a great asset and yet, as we pick up the story at the start of the book, all is about to change, as this ten year anniversary of Meg's death brings to the surface dark secrets which have been buried for far too long.

What then follows is a complicated and emotional story which focuses, not just on the details around Meg's death but also the effect of her loss on the two women who knew her best, namely, Ruth, Meg's mum, and Jen, her cousin, As the story moves forwards and backwards in time, slowly revealing the story piece by shocking piece, we also get to know more about Meg's life, her relationship with both of her parents, and her troubled relationship with her boyfriend.

Uncovering long buried secrets never goes well and the author provides a very sensitive account of the devastation caused by suicide and how there are always so many questions to be answered but never an easy solution. The complications of providing a help-line is well explored, and whilst the emotional and financial constraints of the service bring their own set of problems, for me, it was Jen's tenacity and determination in discovering just why Meg chose to end her own life which really brought this sad story to life.

Beautifully written and sensitively explored Don't Turn Around is both compelling and heartbreaking in equal measure and is this talented author writing at the top of her game. 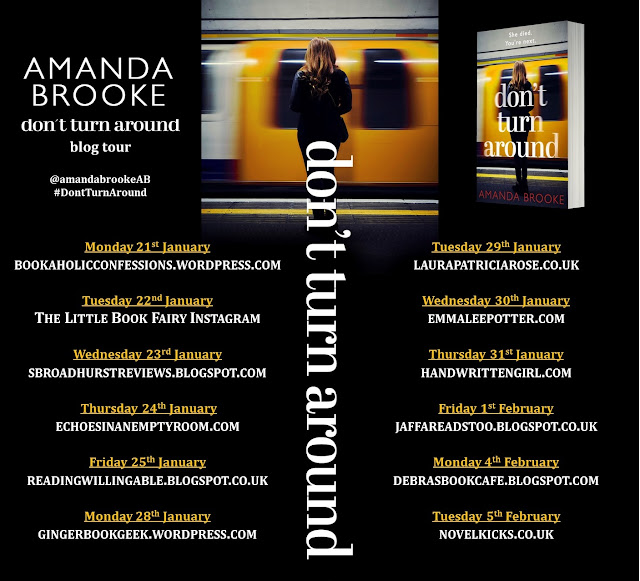