on the publication of her latest Historical novel 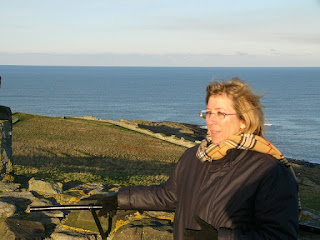 Melinda Hammond writes: Today sees the publication of The Bladesmith, A Georgian romantic adventure that I started working on some years ago. The whole thing began with a medieval castle…

The photo above is of Dunstanburgh Castle in Northumberland, and it is pretty close to how I saw it for the very first time. It was love at first sight! I knew wanted to use this setting and as I wandered around the impressive ruins on a cold November day, the first seeds of a story began to germinate.

A castle demands action, and danger, so I decided to set the story at the time of the Jacobite Rebellion. Dunstanburgh was already a ruin by then, but my fictional castle, Warenford Keep, was restored and preparing to support Bonnie Prince Charlie as he marched south towards London.

My hero is a young man from a family of sword makers who delivers a consignment of swords to the castle, not knowing they are destined for rebel hands. In the mid eighteenth century, some of the finest swords in Europe were being made at Shotley Bridge, just 50 miles from Dunstanburgh. The swordsmiths had fled Germany a century earlier and set up business near the river Derwent, where good quality ironstone and soft water provided two important elements for making steel. Thinking of those early refugees I decided my hero’s family name might be Stahl, which by the eighteenth century had become anglicized. Thus, John Steel was born; blond, blue-eyed and courageous!

So, I had my setting, and my hero, but now I needed a heroine. Enter Katherine, spirited, dark haired, with grey eyes that shone like a freshly polished blade. She lives with her father, who had been imprisoned for treason following the Jacobite uprising of 1715 and returned home a broken man. She and John are immediately attracted to one another, but there’s a problem: she is betrothed to the powerful Lord Warenford!

I loved writing this adventure romance, set against the brooding backdrop of the Northumbrian coast and here is a snippet: John, travelling with his friend and servant, Matthew, sees the castle for the first time:

A low, wind-blown hedge separated the road from lush green pasture that fell away for half a mile or so to the shore and gave way to an expanse of restless blue and white water that stretched to the horizon. They stopped. John took off his hat and wiped his brow.

John set his hat back on his head, pressing it down firmly for a keen breeze was blowing steadily in-shore. 'Aye, Matthew. And that, I fancy, must be Warenford Keep.'

His outstretched finger pointed to a whinstone ridge that reared up from the flat meadows and jutted out into the bay, where the waves broke tirelessly against the black rocks. Built onto the ridge, and gleaming in the bright sun, was a sprawling stone castle. Sturdy high walls perched on top the rocky outcrop, broken occasionally by a high tower, while on the south-facing slope twin round towers stood on each side of the arched gateway.

Matthew glanced at his master. 'They say this was once a wild land. A lord might have need of such a stronghold.'

'And if the Stuart is indeed in Scotland, he might have need of it again. By God, the air is so clear it seems I could reach out and touch those walls!'

1745: John Steel takes a consignment of swords to Warenford Keep on the wild Northumberland coast. He suspects that the swords are destined for the rebel army of Charles Edward Stuart, but matters are complicated by his growing attraction to Katherine Ellingham, daughter of a known Jacobite and betrothed to the powerful Lord Warenford.

With Carlisle in the hands of the Jacobites, and government troops patrolling Northumberland, John makes a desperate bid to retrieve the swords from the Keep before his family is implicated in the uprising, but can he succeed, and protect Katherine and her family at the same time?