1679. A year has passed since the sensational attempt to murder King Charles II. London is still inflamed by fears of Catholic plots. Harry Hunt—estranged from his mentor Robert Hooke and no longer employed by the Royal Society—meets Sir Jonas Moore, the King’s Surveyor-General of the Board of Ordnance, in the remote and windswept marshes of Norfolk. There, workers draining the fenland have uncovered a skeleton.
Accompanied by his friend Colonel Fields, an old soldier for Parliament, and Hooke’s niece, Grace, Harry confirms Sir Jonas’s suspicion: the body is that of a dwarf, Captain Jeffrey Hudson, once famously given to Queen Henrietta Maria in a pie. During the Civil Wars, Hudson accompanied the Queen to France to sell the Royal Jewels to fund her husband’s army. He was sent home in disgrace after shooting a man in a duel.
But nobody knew Hudson was dead. Another man, working as a spy, has lived as him since his murder. Now, this impostor has disappeared, taking vital information with him. Sir Jonas orders Harry to find him.
With the help of clues left in a book, a flying man, and a crossdressing swordswoman, Harry’s search takes him to Paris, another city bedeviled by conspiracies and intrigues. He navigates its salons and libraries, and learns of a terrible plot against the current Queen of England, Catherine of Bragança, and her gathering of Catholics in London. Assassins plan to poison them all.
📖 My Review..
It’s such a treat to go back in time with this talented author and on this current journey into the past we meet up with Harry Hunt as he is, once again, drawn into an investigation which will, this time, take him from the Royal Society in London, to the Fenland area of Norfolk and into the shadowy darkness of seventeenth century Paris.
When a body is discovered in Norfolk, believed to be that of Captain Jeffrey Hudson, a dwarf, who was heavily involved during the English Civil War, Hunt is persuaded to investigate by Sir Jonas Moore, the King’s Surveyor-General of the Board of Ordnance. With the clock ticking Hunt must not only discover the secrets so carefully hidden but must also try to foil a plot to assassinate Catherine of Braganza, the current Queen of England and the wife of King Charles II. In 1679 England was well into the restoration period, and with both religious and political unrest,  Hunt certainly has to keep his considerable wits about him as he endeavours to navigate his way through the muddy waters of this current investigation.
In recreating this time so carefully and by combining fiction with factual history there's a real sense of historical accuracy so that its feels as though you are travelling, alongside Hunt, and his companions, into a complex world of espionage, intrigue and danger. The sights, sounds and atmosphere of the seventeenth century world come alive and the author does a great job of fleshing out his characters so that they leap off right off the page and into whatever shadowy danger is waiting for them.
The Poison Machine is the second book in the Hunt and Hooke series of historical adventures and whilst it is perfectly possible to read this continuation as a standalone story , it does makes sense to get a sense of the characters, particularly Hunt and Hooke, it would be better to start at the beginning with The Bloodless Boy.
Best Read with..a cask of good wine 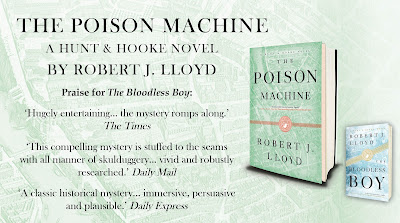 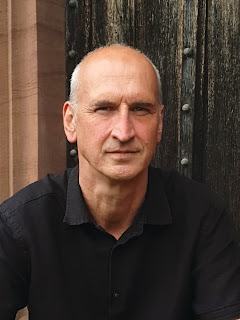 Robert J. Lloyd grew up in South London, Innsbruck, and Kinshasa (his parents worked in the British Foreign Service), and then in Sheffield, where he studied for a Fine Art degree, starting as a landscape painter but moving to film, performance, and installation. His MA thesis on Robert Hooke and the ‘New Philosophy’, inspired the ideas and characters in Hunt & Hook series. He lives in Crickhowell in the Brecon Beacons. The Poison Machine is his second book, following on from The Bloodless Boy.
Twitter @robjlloyd #ThePoisonMachine
@melvillehouse 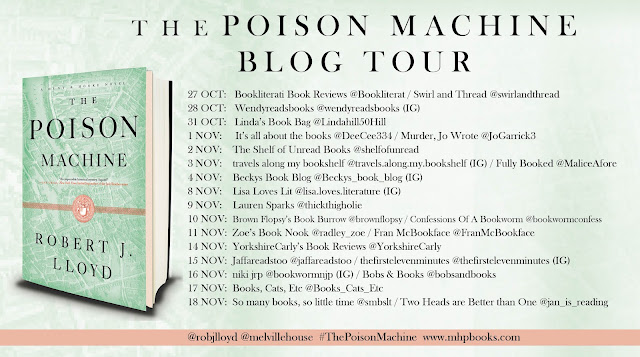