At the start of this clever espionage thriller we meet with Alexander Lamarque, a man of many identities, who uses his considerable wits to keep one step ahead of those who seek to bring harm. Lamarque works for the French external security services but as we discover, over the space of the story, there is far more to this enigmatic man than meets the eye and very soon we are swept into a dangerous world which is heading towards chaos and destruction. Set in futuristic world The Coming Darkness seems remarkably alien and yet there are some similarities with our post pandemic world as in 2037 the insecurities around health continues, and there is an uneasy distrust amongst the population.
The Coming Darkness is definitely not a story to rush as the many twists and turns in the plot need careful consideration but the short, sharp chapters help to create a tight edginess and there’s a real sense of disquiet throughout the whole of the story. The writer has an interesting style of writing and there is much to consider over the space of the novel, lots of characters to get to know and intricate plot strands woven together so it’s imperative that you concentrate, especially during the first third of the novel when the complex layers of the story are being carefully built up.

The Coming Darkness is an accomplished futuristic thriller by a writer who knows how to keep the reader engrossed in a totally believable alternate world.

A theatre director, playwright and actor Greg Mosse is the founder and director of the Criterion New Writing programme at the Criterion Theatre in London, running workshops in script development to a diverse community of writers, actors and directors. In addition, since 2015, Greg has written, produced and stage 25 plays and musicals.
Greg set up both the Southbank Centre Creative Writing School - an open access program of evening classes delivering MA level workshops - and the University of Sussex MA in Creative Writing at West Dean College which he taught for 4 years.
The husband of the bestselling novelist Kate Mosse, Kate’s hit novel Labyrinth was inspired by a house that Greg and his mother bought together in the French medieval city of Carcassonne, where the couple and their children spent many happy summers. Following the success of Labyrinth, Greg created the innovative readers-and-writers website mosselabyrinth.co.uk MosseLabyrinth. The first of its kind MosseLabrynth was the world’s first online accessible 3D world, and the inspiration for Pottermore - the popular Harry Potter website.
A multilinguist, Greg has lived and worked in Paris, New York, Los Angeles and Madrid and has worked as both an interpreter at a variety of international institutions and a teacher in the UK. Greg and Kate live in Chichester, where Kate’s parents founded the Chichester Festival Theatre, they have two grown up children. The Coming Darkness was written during lockdown and is Greg’s debut novel.
Twitter @GregMosse #TheComing Darkness
@MoonflowerBooks
@midaspr 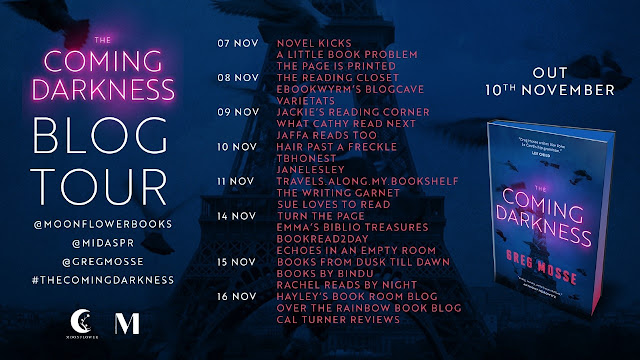