I am delighted to welcome, Tracey Sinclair 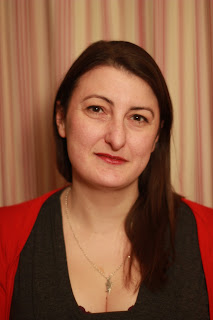 
Dark Dates (Cassandra Bick Chronicles) by Tracey Sinclair
All Cassandra Bick wants is to be left to get on with doing her job. But when you’re a Sensitive whose business is running a dating agency for vampires, life is never going to be straightforward – especially when there’s a supernatural war brewing in London, a sexy new bloodsucker in town and your mysterious, homicidal and vampire hating ex-lover chooses this moment to reappear in your life…


Witty, sharp and entertaining, Dark Dates is a heady mix of vampires, witches and werewolves – with the occasional angel thrown in – and introduces Cassandra Bick, a likeable heroine destined to join the ranks of fantasy’s feistiest females.


Tracey, thanks so much for taking the time to visit our blog - Jaffa and I are delighted that you took the time to answer our questions...

How would you describe Dark Dates?

It’s an urban fantasy book that doesn’t take itself too seriously – so there are all the usual elements (vampires, action, supernatural beings and mysterious heroes) but filtered through a British sense of humour and cynicism.

Contemporary London is very much a part of Dark Dates - how much research did you do for the novel?

Not a huge amount because I set it in an area I was very familiar with and already knew about – so really the only research I had to do was a little background checking to make sure I had my facts right. But I worked around Smithfield and St Paul’s for years, and spent every day wandering around exploring – it really is a remarkable part of the city – so I already had the geography very set out in my head, and knew a lot about the area.

I tend to start out with a very rough idea of events, and work on getting to know the characters – then let them take me where they want to go. It feels more organic and natural to me, but that could also just be a reflection of the fact I’m not very good at plotting!

What do you think makes a good a story?

I think it depends – both on the writer and reader. What works for you in one mood might not in another;  sometimes you want a page turning plot, sometimes you want to be swept up in imagery or imagination, sometimes you just want to revisit familiar characters. I like stories where the characters grip me, or I can identify with them, but I don’t think there’s a one-size-fits-all answer.

Which authors have influenced your writing?

I think it depends on which writing you mean, as my first two books were very different from Dark Dates!  I’d say my early influences were writers like A L Kennedy, but in the fantasy sphere, writers like Jim Butcher, Kelley Armstrong and Terry Pratchett – even though my writing is very different to theirs, I think their storytelling and prose skills are something I aspire to. Outside of books, the most obvious influence would be Joss Whedon, because I think he revolutionised the way we look at female characters, and really pushed that idea of characters being in both the normal and extraordinary world, so they react in the way that normal people would react, and have the same references that we would have. Can you tell us about any future writing projects?

I’m working on a sequel to Dark Dates! Which is enormous fun, although bizarrely now I am getting lots of good reviews for Dark Dates it’s making me nervous, because I worry people won’t like the sequel!

And finally for fun… what book is currently by your bedside ?

Oh, I always have a handful of books on the go so, at the minute I’m reading The Tower by Nigel Jones, which is a history of the Tower of London, The Girl on the Stairs, a Berlin-set thriller by Louise Welch (I love Berlin so I love books set there), and  as those two are hardbacks, my handbag book is The Brutal Art, by Jesse Kellerman, a book about a serial killer that is set against the New York art scene.

What did we think ?

Dark Dates by Tracey Sinclair
My rating: 5 of 5 stars
jaffa's rating 5 paws -  Jaffa was delighted with Dante and Timmy, the cats who feature in Dark Dates...

Dark Dates is a modern, urban fantasy, set in London and populated with vampires and demons, and is an absolute joy to read from start to finish. From the very beginning of the story you get drawn into this tale of supernatural mayhem, and with the intrepid and undeniably quirky Cassandra Bick in charge, there really is never a dull moment. Running a dating agency for vampires and assorted demons is never going to be without an element of danger, but when a serial killer seems to be targeting the very people she aims to help, Cassandra is drawn into a paranormal war of epic proportions.

What I loved about this book was just how easy it was to read, the narrative flows like you are sitting and chatting over coffee with your slightly geeky best friend, there’s never a lull in the conversation, and the company doesn’t stress you out. With undeniable poise, the narrative hurtles along and expertly layers the tension, until you never truly know what’s going to happen next. The characters fill your mind with their personality, and literally leap off the page to enter into your subconscious, so that even now, days after finishing the book, I still wonder what they are all up to, and can’t wait until I meet them all again.

I’m not a great expert on the paranormal genre, and whilst I have entered into the spirit of some of the other paranormal offerings out there, they have tended to all blur together, and yet Cassandra Bick lives on in my mind , she’s fun, lively, completely irreverent and an absolute delight – bring on book two !


It's been great fun hosting this author session. Tracey, we wish you continued success with your writing and look forward to reading more about Cassandra.....