Friday again, and it's time for my choice of book for Friday recommends...

This is an exciting book blog hop that book bloggers can take part in once a week to share with their followers, the books that they most recommend reading!

The rules for Friday Recommends are:

Follow Pen to Paper as host of the meme.
Pick a book that you've read, and have enjoyed enough to recommend to other readers. It can be a book you've read recently, or a book you read years ago - it's up to you - but make sure you tell us why you love the book (like a mini review). You make the post as long or as short as you like.
Visit the other blogs and enjoy!


My choice this week is : 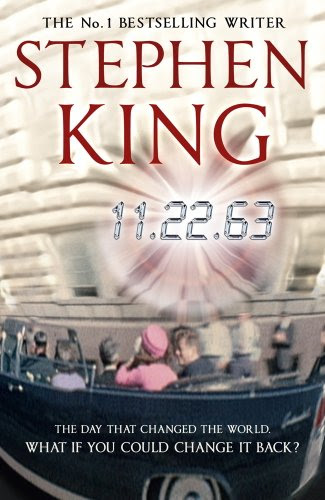 What if you could go back in time and change the course of history?

Jake Epping is given the secret of time travel, and armed with enough information he sets out to change history, not just the history surrounding the assignation of John F. Kennedy, but also of the people he meets on his journey from 2011, back to 1958.Leaving behind everything he knows, he enters an age devoid of computers and mobiles phones, and prepares to take on one of the biggest challenges of his life.

Stephen King has written an incredible story, his attention to detail is superb, and his ability to invoke the America of the late 1950's, early 1960's is so utterly believable, you feel that you are walking the same streets, sitting in the same bars, and dancing the Lindy Hop at the school dance...and yet, as with all King's novels there is that underlying knowledge that all on the surface, is not as it seems...

"We never know which lives we influence , or when, or why. Not until the future eats the present anyway. We know when it's too late" © Stephen King

If you've never read a Stephen King book before, - don't be fooled into thinking he only does horror, he also does Time Travel.... very well indeed.


Read it if you can- it won't be time wasted, just be prepared to do nothing until you have finished it..