One from the shelf... 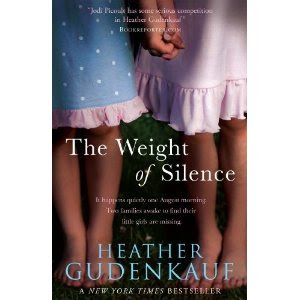 My shelf pick for today is The Weight of Silence by Heather Gudenkauf - which is a beautifully written suspenseful family drama. I've only had the book since December last year, so it's not lingered long in the pecking order. Some books can languish forever, before something calls me to read them - but this one had some good reviews when it was featured as part of the TV Book Club Summer choice in 2010....and although I'm not always influenced by TV book clubs, this one did seem quite enticing....
I've had a long and lazy reading day today - and have read about 2/3 of the book, it's one of those that I can't put down for long.
Jaffa is enjoying the whodunnit part - he's a great one for conjecture...and quite often wants to race to the end before I'm ready - he's not good at picking the culprit and very often gets sidetracked by other things, and if there's someone with a dog involved in the mystery -Jaffa always goes for them....we'll see !
Posted by Jaffareadstoo..... at 16:31