From the bestselling author of THE ONE, now an eight part NETFLIX series. Set in the same world as THE ONE, THE MARRIAGE ACT is a dark, high concept thriller.
What if marriage was the law? Dare you disobey?
Britain. The near future. A right wing government believes it has the answer to society’s ills – the Sanctity of Marriage Act which actively encourages marriage as the norm, punishing those who choose to remain single.
But four couples are about to discover just how impossible relationships can be when the government is monitoring every aspect of our personal lives, monitoring every word, every minor disagreement…And it will use every tool in its arsenal to ensure everyone will love, honour and obey!
📖 My Review..
The Marriage Act was the book I needed to read in the aftermath of Christmas as it certainly took me out of my comfort zone and right into a futuristic world which is both scarily realistic and dangerously addictive so much so that I read the book in a couple of sittings carefully carrying it from room to room so I wouldn't miss anything.
Written in easy to read character vignettes, The Marriage Act takes us right into the very heart of a frightening dystopian world which this clever author recreates so very well. I enjoyed meeting all the characters whose lives very quickly become integral to this clever thriller which I am being particularly vague about as I don't want to give away any spoilers as, believe me, this is one of those books you need to go into without any prior knowledge of what is to some. Right from the opening the story is scarily plausible, and by using the concept of smart devices, watching and listening to every conversation, there was never a moment when the story didn't pulsate with menace.
The Marriage Act is a clever and sophisticated dystopian thriller which moves seamlessly between flawed characters who, although in the main each of them are largely unlikable, they all, very quickly, become as familiar as a friend who you don't want to spend time with and yet their company is so compelling that you find yourself  irresistibly drawn towards them with a strange fascination.
I thoroughly enjoyed reading The Marriage Act and can easily see it on my books of the year list 😊
About the Author
John Marrs is an author and former journalist based in London and Northamptonshire. After spending his career interviewing celebrities from the worlds of television, film and music for numerous national newspapers and magazines, he is now a full-time author.
Twitter @johnmarrs1 #TheMarriageAct
Website
@panmacmillan 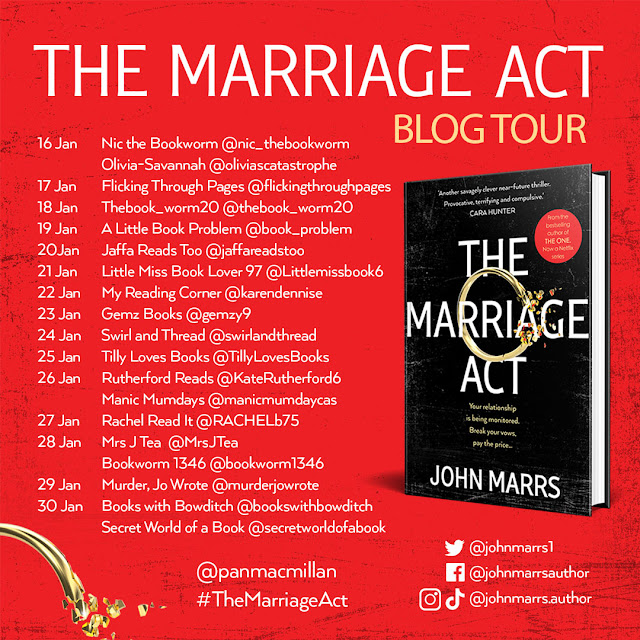