A rebellious daughter
1923. Among the ancient honey-coloured walls of the tiny island of Malta, strangers slip into the shadows and anyone can buy a new name. Rosalie Delacroix flees Paris for a dancer’s job in the bohemian clubs deep in its winding streets.
A sister with a secret
1944. Running from the brutality of war in France, Florence Baudin faces a new life. But her estranged mother makes a desperate request: to find her vanished sister, who went missing years before.
A rift over generations
Betrayals and secrets, lies and silence hang between the sisters. A faded last letter from Rosalie is Florence’s only clue, the war an immovable barrier – and time is running out...
📖 My review..
It's 1944 and Florence Baudin and her friend Jack Jackson have escaped occupied France and arrive in the sleepy Devon village where Jack has a country cottage. Although the immediate danger of war is behind them for Florence's sisters, Hélène and Élise, who are still in France, the war is an ever present danger. When Florence plucks up the courage to visit her mother, Claudette, who is now also living in England, she is given the almost impossible task of tracing her mother's sister Rosalie who hasn't been see since she ran away from home in 1925.
What then follows is an intriguing dual time story which is told from the perspective of both Florence and Rosalie. Each have a fascinating story to tell, especially Rosalie whose life on the tiny island of Malta is filled with intrigue, passion and danger. Both time elements flow beautifully with neither one taking centre stage but allowing both Florence and Rosalie their time in the spotlight. I especially enjoyed the wonderful description of life on Malta, a tiny island whose inhabitants showed such bravery and whose winding streets were filled with so much intrigue. Throughout the story the author gets the balance perfectly pitched between family drama, dangers of war and the intrigues of the heart.
Whilst The Hidden Palace follows on from The Daughters of War, which is the first book in this series, it can be read enjoyably as a standalone story but for greater insight into Florence's relationship with her mother and sisters, and the way that Jack Jackson fits into the story, it would be interesting to read from the beginning. That there is to be another book in the series, released in 2023, is indeed good news for fans of this talented author's work. I look forward to picking up the story again in Night Train to Marrakech
📖 Best read with...Kafe Fit-tazza and a ricotta filled kannol
About the Author 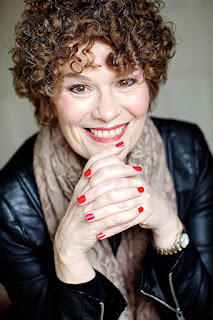 Dinah Jefferies began her career with The Separation, followed by the number 1 Sunday Times and Richard and Judy bestseller The Tea-Planter’s Wife. Born in Malaysia, she moved to England at the age of nine. When she began writing novels, deeply influenced by her Eastern childhood, she was able to return there on annual research trips for each new novel.
With her most recent bestseller, her seventh novel The Tuscan Contessa, she has moved to writing about a European setting for the first time and continues that in this new series.
She is published in 28 languages and over 30 countries and has twice been a Richard and Judy bookclub pick.
Twitter @dinahjefferies #TheHiddenPalace
Website
@HarperCollins
@RandomTTours 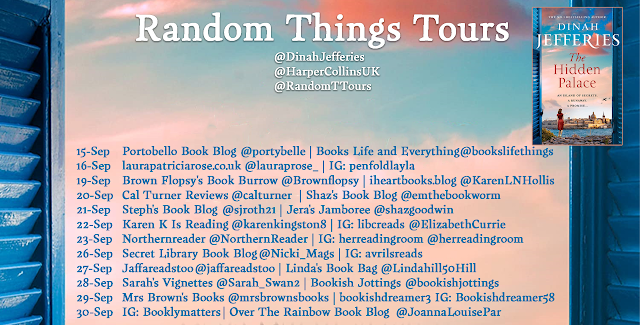