Review ~ The Invention of Wings by Sue Monk Kidd 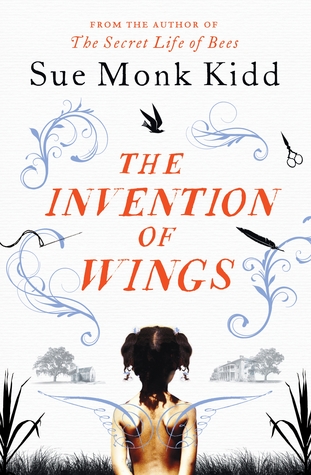 Following the lives of two women, The Invention of Wings takes us on a journey to Charleston in the deep American South in the early part of the nineteenth century. Born into a wealthy plantation family, the Grimké sisters understand the concept of slavery, and yet when Sarah Grimké turns eleven, she is presented with the gift of a ten year old slave child, who is known as Hetty ‘Handful’ Grimké. Taken from her mother, and wrapped in lavender ribbons, Hetty is presented to Sarah, ostensibly to become Sarah’s waiting maid. Sarah’s reluctance to accept Hetty as a ‘gift’, the repercussions of this action, and Sarah’s response to it, reverberate, not just on immediate impact, but on the continuing stability of the lives of those around them.

Spanning the next thirty-five years, this is the story, not just of Sarah and Hetty, but also, of those who lives come into contact with them.

Beautifully written, and based on the true and astonishing story of Sarah Grimké’s passionate fight against the use of slavery, the novel is a sensitive and heartfelt evocation of a world, hopefully long gone, in which dreadful crimes where perpetrated against humankind.

Overall, this is a difficult book to ‘enjoy’ as it reveals a shocking world of possession and rejection. However, running alongside the story of overwhelming wickedness and prejudice, the book's lasting legacy is that an abiding goodness can be found,  if hope is never abandoned.

My thanks to NetGalley and Headline/Tinder Press for my advance reading copy of this book.
~*~*~

When her first novel, The Secret Life of Bees, was published by Viking in 2002, it became a genuine literary phenomenon, spending more than 2½ years on the New York Times bestseller list. It has been translated into 36 languages and sold more than 6 million copies in the U.S. and 8 million copies worldwide. Bees was named the Book Sense Paperback Book of the Year in 2004, long-listed for the 2002 Orange Prize in England, and won numerous awards.