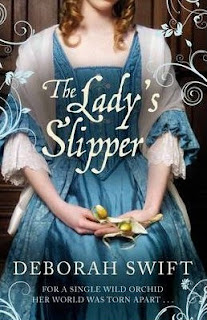 It  is 1660. The King is back, memories of the Civil War still rankle. In rural Westmorland, artist Alice Ibbetson has become captivated by the rare Lady's Slipper orchid. She is determined to capture it's unique beauty for posterity, even if it means stealing the flower from the land of the recently converted Quaker, Richard Wheeler. Fired by his new found faith, the former soldier Wheeler feels bound to track down the missing orchid. Meanwhile, others are eager to lay hands on the flower, and have their own powerful motives. Margaret Poulter, a local medicine woman, is seduced by the orchid's mysterious herbal powers, while Geoffrey Fisk, Alice's patron and former comrade-in-arms of Wheeler, sees the valuable plant as a way to repair his ailing fortunes and cure his own agonizing illness. Fearing that Wheeler and his friends are planning revolution, Fisk sends his son Stephen to spy on the Quakers, only for the young man to find his loyalties divided as he befriends the group he has been sent to investigate. Then, when Alice Ibbetson is implicated in a brutal murder, she is imprisoned along with the suspected anti-royalist Wheeler. As Fisk's sanity grows ever more precarious, and Wheeler and Alice plot their escape, a storm begins to brew, from which no party will escape unscathed. 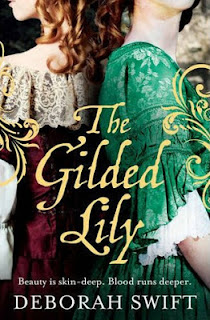 Winter, 1661. In her short life Sadie Appleby has never left rural Westmorland. But one night she is rudely awoken by her older and bolder sister, Ella. She has robbed her employer and is on the run. Together the girls flee their home and head for London, hoping to lose themselves in the teeming city. But the dead man's relatives are in pursuit, and soon a game of cat and mouse ensues amongst the freezing warren that is London in winter. Ella is soon seduced by the glitter and glamour of city life and sets her sights on the flamboyant man-about-town, Jay Whitgift, owner of a beauty parlour for the wives of the London gentry. But nothing in the capital is what it seems, least of all Jay Whitgift. Soon a rift has formed between Ella and Sadie, and the sisters are threatened by a menace more sinister than even the law. Set in a brilliantly realised Restoration London, The Gilded Lily is a novel about beauty and desire, about the stories we tell ourselves, and about how sisterhood can be both a burden and a saving grace.

The past is endlessly fascinating. I love it that I can highlight our modern experience by putting it into a new context, often through a situation from the past. It is human nature that people tend to repeat mistakes, and by looking to history we can see how people from the past handled what seem to be our current dilemmas but are actually age-old questions. It is usually the age-old questions, the ones of truth, life, existence, that I am interested in! I also enjoy to give a voice to those in history that are often forgotten - not Kings and Queens, but ordinary men and women who have lived through extraordinary or dangerous times.

Where did you get the inspiration for The Gilded Lily?

I was initially interested in the fact that 17th century girls in the city of London were under pressure to conform to an ideal of beauty, just as they are today. The list of apothecaries' ingredients commonly applied was alarming - for example the use of ceruse or 'white lead' which was supposed to make your complexion pale. It led me to wonder what would happen if two country girls - one pretty and one plain, and who previously had had no exposure to fashion - were forced to start their lives again under this pressure. Actually, the story developed and expanded from this germ of an idea and allowed me to not only explore the relationship between the two sisters but also the nature of storytelling itself.

Where did your research for The Gilded Lily take you?

I travelled to London, but most of 17th century London was destroyed in the Great Fire, so I did a lot of Archival research, examining old maps, chapbooks, which were the newspapers of the day for the common man, and I also looked at diaries (such as Pepys for London and Lady Anne Clifford for Westmorland). I read anything I could get hold of that would give me a sense of poor people's lives of the time. The London Museum gave me a sense of 17th century London, and also portraits in the National Portrait Gallery for some of the more affluent characters in the novel. To get a sense of wig making I practised at a theatrical wigmakers  and I also had a go at mixing some of the recipes for 17th century cosmetics from housewifery books of the time. I am a fanatical researcher and love that aspect of my writing.

I began by writing mostly for myself, but now I know my novels will be read, I am much more aware of the reader than I was! Though I think I have always been in some sense a reader as I read all the time, and am very aware when something in another book I am reading does not ring 'true'.

Readers construct my books in their imaginations, and the memory of that experience can linger a lifetime. So I am always immensely grateful when someone has invested their time in one of my books.

It's not very special! But it is an office - surrounded by piles of books and papers and notes, and bits of research, and the dregs from my last cup of tea. Sometimes I like to go 'on location' to write. For example I wrote some of THE GILDED LILY sitting by the Thames, and I wrote some of THE LADY'S SLIPPER inside Levens Hall which I was using as an interior. It helps me to get a real sense of place and gives me an atmosphere I could not have imagined.

I've finished my next - A DIVIDED INHERITANCE which is set in 1609 and is the story of a woman whose life is turned upside down when a cousin she has never met arrives unannounced at her house. Because of him she ends up travelling to Spain where she comes into contact with a charismatic sword master at his esoteric fencing school in Seville. I loved researching Golden Age Spain which is visually stunning with its Moorish palaces and grand squares, and I loved writing the story which is one of courage, hope and the triumph of kinship over adversity.

Also I thought I deserved some sunshine after researching the coldest winters and the Little Ice Age for THE GILDED LILY!

A DIVIDED INHERITANCE is scheduled for publication in September 2013.

And finally for fun..

Lots! But I'll highlight THE WITCH AND HER SOUL by Christine Middleton. A debut novel by a woman of 80 years old - a fantastic literary read about The Pendle Witches. The research is impeccable and my paperback copy is beautifully produced.

Deborah - thank you so much for giving such an insightful interview. Jaffa and I thrilled to have been able to chat with you about The Gilded Lily, and Jaffa is even more thrilled to meet your lovely cat Tabby....

Deborah has very kindly donated a copy of The Gilded Lily to one lucky UK winner of this giveaway.