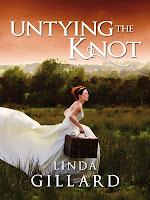 UNTYING THE KNOT - a bitter-sweet love story from the award-winning author of Kindle bestseller, HOUSE OF SILENCE.

SYNOPSIS
A wife is meant to stand by her man. Especially an army wife. But Fay didn't. She walked away - from Magnus, her traumatised war hero husband and from the home he was restoring: Tullibardine Tower, a ruined 16th century tower house on a Perthshire hillside. Now their daughter, Emily is marrying someone she shouldn't. And so is Magnus...

"Everyone makes mistakes, but I sometimes think I’ve made more than most. Marrying Magnus was one of them. But the biggest mistake I ever made was divorcing him."

jaffa and I are dancing with joy as Linda Gillard's latest e-book UNTYING THE KNOT has now been released as an ebook and I downloaded it to kindle yesterday.

Started it last night and really enjoyed the first few chapters ....I could very well have sat up and read through the night - it's THAT good !!