Blog Tour ~ A Matter Of Interpretation by Elizabeth Mac Donald


🌠 Delighted to be part of this exciting Instagram and Blog Tour 🌠

It’s thirteenth-century Europe and young monk, Michael Scot, has been asked by the Holy Roman Emperor to translate the works of Aristotle and recover his ‘lost’ knowledge.

The Scot sets to his task, travelling from the Emperor’s Italian court to the translation schools of Toledo and from there to the Moorish library of Córdoba. But when the Pope deems the translations heretical, the Scot refuses to desist. So begins a battle for power between Church and State – one that shaped how we view the world today..

A Matter of Interpretation is a complex historical story which takes a little while to get into as, initially, there's rather an abundance of characters to keep up with, however, once the narrative captured my imagination, I was definitely transported back to a rather unpredictable time in European history, and became involved in the complex struggle between the Holy Roman Emperor and the Papacy. The main protagonist of the story is Michael Scot, a monk, who is tasked with the job of translating the works of Aristotle, but when the Pope declares these translations heretical it opens up a complicated power struggle.

A Matter of Interpretation is a difficult story to try to explain, so I guess the answer to that is not to try, that way I don't give too much away, or do the author a disservice by explaining her creation in a way that doesn't do it justice. However, what comes across is the author's passion for this period in history and her unique writing style brings the medieval world alive in quite a literary way. Whilst the story is, of course, a fictional account, Michael Scot is known to have existed and the author takes the facts of his life and weaves them into a fictional tale of historical complexity.

A Matter of Interpretation is a well presented book with a sumptuous cover which reminded me of a beautifully illustrated medieval manuscript. It's also a commendable debut novel by a talented historical fiction writer.

Born in Dublin, Elizabeth is an academic who lives in Italy, where she teaches English at the University of Pisa. She is a widely published author of short stories, essays and translations of literary works into Italian. A Matter of Interpretation is her debut novel. In her spare time, Elizabeth sings in the choir of the Scuola Normale, Pisa. 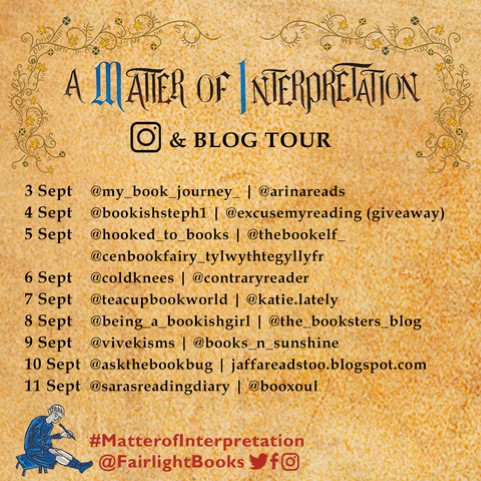