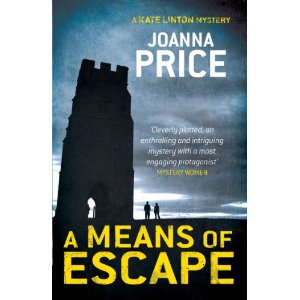 A Means of Escape

is published by Aston Bay  Press


What inspired you to become an author?


I think it was who rather than what. I fell in love with Agatha Christie books when I was about 13. I bought my first one from a second hand bookshop down the road from my Granny’s house. It was the ABC murders and I remember finishing it and thinking ‘wow’. It was so simple and yet so clever. It was the first time I’d been introduced to the concept of a serial killer or a story that had a twist. That was when I first decided I wanted to be a writer.

Are you a disciplined author, and where do you write?


Yes but only because I haven't got much choice. I work and I've got kids so I don't have a lot of time left over to write. I mainly write in the evenings and sometimes I get up before everyone else and manage to squeeze an hour in.


What gave you the inspiration for your latest novel A Means of Escape?


I knew I wanted to write crime fiction and that I wanted to set the book in Glastonbury. The actual idea for the plot came out of a chance conversation with a friend. I won't say anymore because I don't want to give anything away!

What comes first, the people or the plot?

The people. Kate Linton, the protagonist, was very clear in my mind before I even started writing. I felt like I already knew her but more in terms about how she made me feel rather than her characteristics. The way she looked came much later and even now that's still quite fuzzy. I don't describe the way she looks very much in the novel so that the reader can build up their own picture of her in their minds eye.

Do you find that writing come easily to you?


Sometimes - but sometimes it's a real struggle. I can feel the story and hear it in my head but it's much harder to get it down on paper. I suppose it's the same as anything we do whether it's work or sport or socialising. Some days we're on fire and other days we might as well not bother


Both. I write books that I enjoy and that I know my friends would like. I want to them be entertained rather than impressed.


Who are your favourite authors?


I still love Agatha Christie! I also like Ruth Rendell, Minette Walters and PD James. In fact I'll read any crime fiction. I love it for the obvious reasons - the challenge of trying to solve the mystery, trying to guess who ‘dunnit’ and why, but I also find also it oddly comforting. There’s reassurance in its formulaic nature, the way that good generally overcomes bad; the satisfactory conclusion we don’t always get in real life. It’s the literary equivalent of a bacon sandwich and a cup of tea. I also love Jane Austen. Again, it's about the way her books make me feel. It's not just her writing but I find it it comforting to read about a bygone time.

What is your favourite classic novel?


That's difficult because I've got 2 favourites. A Room with a View and Pride and Prejudice. Probably A Room with a View. I think I've read it about 10 times. It's the book I turn to when I'm ill or feeling a bit low. Again, I find it oddly comforting.

What are you reading at the moment?


PD James 'Death Comes to Pemberly'. It's PD James sequel to Pride and Prejudice and it's what you get when you cross a Jane Austen novel with a crime thriller. Fabulous!


A huge THANK YOU to Joanna for giving such detailed answers - Jaffa and I are delighted that you could visit our blog, and we wish you every success in your writing career.

On a cold November morning a woman’s body is discovered on Glastonbury Tor. Detective Inspector Rob Brown and his colleague Detective Sergeant Kate Linton head the murder investigation. When a second woman is abducted in Glastonbury, there are real fears that the killer may have struck again, the only problem is that the mystical community around Glastonbury creates more questions than answers.

This is an accomplished debut novel, with good character analysis, and a well driven and gutsy plot. There is enough information about the investigative process without it being too cumbersome, and some genuinely funny moments which help to lighten the mood. I especially warmed to both lead characters – the details of Linton and Brown’s separate personal lives adds a nice dimension to what could develop into a strong partnership. The added frisson of a “will they, won’t they” atmosphere to their relationship, makes the book all the more enjoyable to read.


It is refreshing to have another British female crime writer on the scene, and I am pleased to discover that this is the first book in a proposed series featuring Kate Linton. I am sure that the series will gain in strength and popularity, and I look forward to spending more time in the company of this gutsy and intelligent detective sergeant.