Review - A Means of Escape by Joanna Price 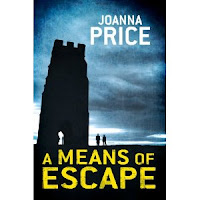 A Means of Escape by Joanna Price
My rating: 4 of 5 stars
jaffa's rating 4paws - he really wants to go to Glastonbury !
I was delighted to be given an early reading copy of A Means of Escape to review for bookdagger real readers.
On a cold November morning a woman’s body is discovered on Glastonbury Tor. Detective Inspector Rob Brown and his colleague Detective Sergeant Kate Linton head the murder investigation. When a second woman is abducted in Glastonbury, there are real fears that the killer may have struck again, the only problem is that the mystical community around Glastonbury creates more questions than answers.
This is an accomplished debut novel, with good character analysis, and a well driven and gutsy plot. There is enough information about the investigative process without it being too cumbersome, and some genuinely funny moments which help to lighten the mood. I especially warmed to both lead characters – the details of Linton and Brown’s separate personal lives adds a nice dimension to what could develop into a strong partnership. The added frisson of a “will they, won’t they” atmosphere to their relationship, makes the book all the more enjoyable to read.
It is refreshing to have another British female crime writer on the scene, and I am pleased to discover that this is the first book in a proposed series featuring Kate Linton. I am sure that the series will gain in strength and popularity, and I look forward to spending more time in the company of this gutsy and intelligent detective sergeant.