Blog Tour ~ Rocco and the Price of Lies by Adrian Magson 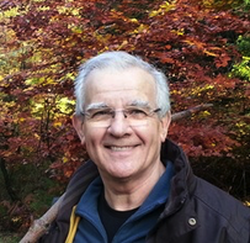 Hi, Adrian and welcome back to Jaffareadstoo. Rocco and the Price of Lies is now the seventh book in your crime series set in 1960’s France. When you wrote the first book, Death on the Marais, did you expect to go on to write a long running series?

I certainly wanted to, but I wasn’t certain I could write a sequel until close to the end of the book. The characters seemed to mesh well, which was my green light to continue.

What can you tell us about this latest book that won’t give too much of the plot away?

Rocco is appointed by the Interior Ministry to investigate the suicide of a senior politician. (A blackmail letter indicates that the politician has been helping himself to government funds to buy a work of art). Rocco’s not convinced at first that it’s anything but what it seems. But another suicide and a third, each one with the same incriminating letter about purchased works of art and corruption. Ordered to get the investigation done quickly, Rocco suspects the government wants to cover up bad news. But he’s not one to brush anything under the carpet, and with the help of Detective René Desmoulins, rural policeman Claude Lamotte and, unusually, his usually frosty boss, Commissioner Francois Massin, he sets about narrowing down the source of the letters and the paintings. But in doing so he gets too close to some people who decide to stop the investigation in its tracks.

Inspector Lucas Rocco is the main protagonist of your novels, what can you tell us about him, and have you noticed any changes in his character since the start of the series?

Rocco is single, tall and tends to stand out as he favours smart clothes, a long, dark coat and a calm but firm manner. He’s an honest cop, used to fighting gang crime in Paris, but now posted – against his wishes - to Picardie in rural northern France to help spread investigative resources to the provinces. He doesn’t care for the suits in the Interior Ministry, and has a long-running prickly relationship with his boss, Massin, with whom he has history during France’s Vietnam campaign in the 1950s. But he’s determined to do his duty come what may, in the hopes that he can get posted back to Paris.

Rocco has mellowed (slightly) since book 1, on his views of rural life, as he finds that crime here is just as dangerous as it is in the city, albeit less obvious. Welcomed to the village of Poissons-les-Marais by his neighbour Mme Denis, and the local rural cop, Lamotte, the villagers have come to mostly trust him after an in-built suspicion of any city cop in their midst. He trusts the people he works with, avoids Massin as much as possible because of their history, which wasn’t good - especially for Massin - and is in no hurry to settle down. But that doesn’t mean he won’t; he just has to find the right person.

The series has, so far, focused on quite a wide variety of crimes, what do you think makes a good fictional villain and detective?

Believability, I think. The cops are not supermen or women, the villains are bad, even dangerous, but have to be interesting in their badness. France is a large country and the resources for tracking criminals’ activities in the 1960s are slow, requiring a methodical approach and lots of patience. And Rocco has both.

Where do you get your inspiration for the stories, and, as one book ends, do you already have the idea in place for a new story?

The crime has to be believable for the times and place. I try to use a backdrop of France in the 1960s (eg: the echoes of WW2 and France’s Vietnam conflict; the results of the country’s Algerian situation; the many assassination attempts on President de Gaulle; the battle between the police and the criminal gangs from overseas and the growing drugs trade. ‘Price of Lies’ is a slight departure in that art fraud and theft has been going on forever, but it seemed to me to offer Rocco a different - and interesting - kind of investigation to pursue.

I usually have a vague idea for the next book, and there are a couple of small fishes swimming about in the back of my brain at the moment. But if I tell you about them I’ll probably never write another word!

And finally what do you hope readers will take away from your Lucas Rocco crime novels?

First and foremost, entertainment. I want readers to enjoy Rocco and the setting, the other characters, good or bad, the same way I enjoy writing about them. I especially want them to believe in the world of rural France in the 1960s (where I went to school), when there were no mobile phones or computers, and limited forensic facilities. But that doesn’t mean the pace is slow; there’s plenty happening in Rocco’s world.

More than anything I don’t want new potential readers to think this is going to be a French lesson (there’s very little French terminology), or a history lesson. This is a series of crime stories set in a part of France where Paris is another country to the locals, and where very little has changed since I was there a long time ago.

Murder by suicide? Three senior government officials - a judge, politician, and an ex-police chief - are all dead by their own hands.

Inspector Lucas Rocco finds himself once more working for the Interior Ministry: undertaking an investigation meant to avoid a government scandal and ignoring unpalatable truths. He’s soon convinced that common denominator must be at play…

Rocco uncovers top-level fraud, theft and deception. Resisting the demands to reach a rapid conclusion, and realising the deceptions go righto the top, soon Rocco finds himself targeted as someone who must be stopped - and by any means possible.


In Rocco and the Price of Lies we meet up again with Inspector Lucas Rocco in 1960s France, and as this is now the sixth book in the series those who have followed from the beginning will understand just how this clever detective goes about solving the complex crimes which seem to come his way.

This story sees Rocco once again drafted in to help the Interior Ministry in a detailed investigation which delves deeper into the complicated world of fraud, theft and deception. Someone seems to be targeting senior officials who may, or may not, have some deadly secrets to hide. As always, Rocco gets right into the centre of the investigation and I enjoy observing his systematic approach to crime solving which is so cleverly reminiscent of a less technological age when detectives relied more on their instincts and good old fashioned sleuthing.

There’s a complexity to this story which needs careful reading as there is much to take in but the author has a fine way of drawing in the reader so that even if you haven't read the other books in the series, it is entirely possible to enjoy this one as a standalone. The story is action packed and pacy and has more than enough twists and turns to keep you guessing until the end. There's a real sense of menace especially when Rocco gets drawn into some dangerous situations.

The ending of the book is entirely fitting and I hope that it means we will see more Inspector Rocco adventures in further stories.

Hailed by the Daily Mail as “a classic crime star in the making”, Adrian had written 21 crime and spy thriller books based around: Gavin & Palmer (investigative reporter Riley Gavin and ex-military policeman Frank Palmer; Harry Tate, ex-soldier and MI5 officer; Inspector Lucas Rocco; Marc Portman (The Watchman); investigators Ruth Gonzales and Andy Vaslik. Adrian also has hundreds of short stories and articles in national and international magazines to his name, plus a non-fiction work: Write On! - The Writer’s Help Book (Accent Press). Adrian lives in the Forest of Dean and rumours that he is building a nuclear bunker are unfounded. It’s a bird’s table. 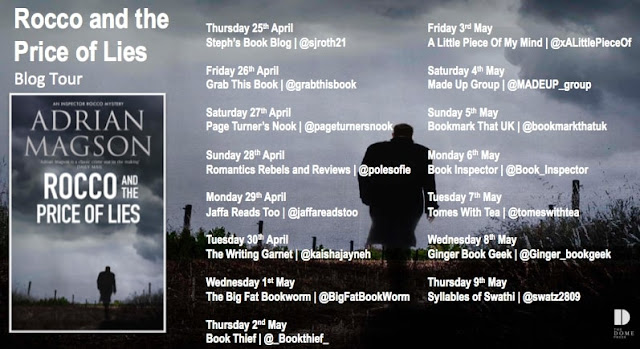