Blog Tour ~ The Confessions of Frannie Langton by Sara Collins

They say I must be put to death for what happened to Madame, and they want me to confess. But how can I confess what I don't believe I've done?

1826, and all of London is in a frenzy. Crowds gather at the gates of the Old Bailey to watch as Frannie Langton, maid to Mr and Mrs Benham, goes on trial for their murder. The testimonies against her are damning - slave, whore, seductress. And they may be the truth. But they are not the whole truth.

For the first time Frannie must tell her story. It begins with a girl learning to read on a plantation in Jamaica, and it ends in a grand house in London, where a beautiful woman waits to be freed.

But through her fevered confessions, one burning question haunts Frannie Langton: could she have murdered the only person she ever loved?

In London, in 1826, Frances Langton stands in the Old Bailey, accused of murdering her employers in a dramatic and heinous crime. However, as Frannie’s sad and sorry life story starts to emege we learn so much about this complicated woman who started life on a Jamaican plantation where she once lived as a house slave.

Never quite sure of her parentage, Frances comes to London with her slave owner, Mr. Langton, where she is given into the employment of George and Marguerite Benham. Once she is settled in the household Frannie's wit and intelligence attracts the attention of the unconventional Marguerite whose moral standards are, it must be said, rather unusual for the time. However, as it turns out, Frannie’s time with the Benham’s in their household, means that she exchanges one kind of servitude for another, with, as it turns out, disastrous consequences.

The Confessions of Frannie Langton is a really fascinating historical narrative which is made all the more interesting for shining a spotlight on a terribly shameful past, and which then,very cleverly, links the way in which Frances, a woman who was conflicted by her gender, race and class, was forever let down by her lowly station in life.

The Confessions of Frannie Langton is a very clever debut, beautifully written with a distinctly authentic feel,  it is one of those fascinating, but cautionary, stories which stays with you long after the last page is finished.

Sara Collins studied law at the London School of Economics and worked as a lawyer for seventeen years. In 2014 she embarked upon the Creative Writing Masters at Cambridge University, where she won the 2015 Michael Holroyd Prize of Re-creative Writing and was shortlisted for the 2016 Lucy Cavendish Prize for a book inspired by her love of gothic fiction. This turned into her first novel, The Confessions of Frannie Langton. 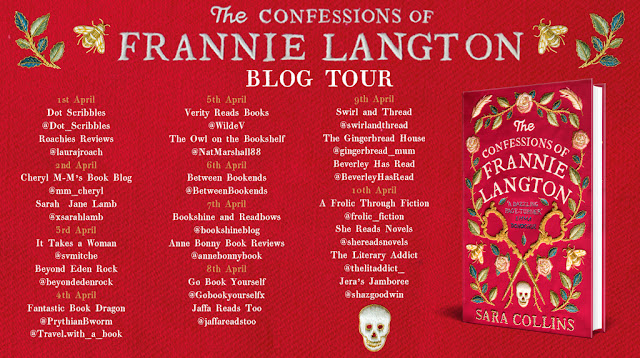