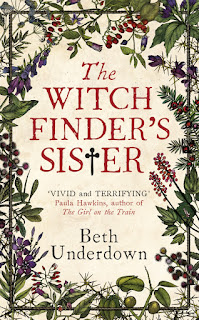 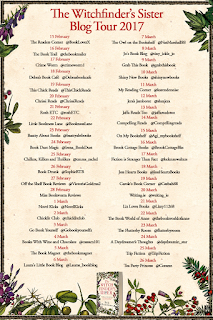 The number of women my brother Matthew killed, so far as I can reckon it, is one hundred and six...'

1645. When Alice Hopkins' husband dies in a tragic accident, she returns to the small Essex town of Manningtree, where her brother Matthew still lives.

But home is no longer a place of safety. Matthew has changed, and there are rumours spreading through the town: whispers of witchcraft, and of a great book, in which he is gathering women's names.

Some years ago I went to a Halloween fancy dress party dressed as witch, with my pointy black hat, long black dress and black boots I thought that I looked suitably ‘spooky’. Today we take the idea of witches in a very light hearted manner but back in the seventeenth century being accused of witch craft was a very different business.

In 1645, Alice Hopkins returns home, from London, to Manningtree in Essex where after a change in her circumstances she is a widow, pregnant and penniless. She now has the need to fall upon the mercy of her half-brother, Matthew, to give her bread and board. However, Alice finds out, to her cost, that Matthew is involved in a mysterious and unholy business, which keeps him out late and brings him into contact with some influential and dangerous people.

The book is a beautifully written observation of human nature with all its many facets and disguises. On one side, we have Matthew, who is utterly convinced that what he is doing is ridding the world of evil, whilst at the same time we have the creeping terror of women being wrongfully accused and woefully represented. There is no doubt that witch finding was a deadly occupation, and the book doesn’t shy away from the scurrilous and uncomfortable detail of how witch examinations took place and of the unwholesome justice that allowed lonely and vulnerable women to be exploited in such a dreadful way.

Time and place is captured perfectly and for the short time it took for me to read the novel I felt like I was fully immersed in seventeenth century life. The stifled and gloomy atmosphere of living at the old Thorn Inn with Matthew comes vividly to life as does the subservient nature of those women who Matthew employs to keep his home in order. Alice very quickly became an integral character and I think that her relationship with her half-brother and that of the family dynamic was finely examined and utterly believable.

There is much to take in, not just about the perverse superstition of a country very much in a state of instability, as the English civil war was still raging, but also in the way that people’s attitude towards each other was uncomfortably wary and so often irrationally distrustful. In many ways this made it easier for Matthew Hopkins to go about his deadly witch finding business as communities were all too eager to point the finger of blame towards those defenceless women who had no hope of ever redeeming themselves.

Filled with superstition, secrets, gossip and innuendo, The Witchfinder’s Sister brings to life a shameful part of our past in a story which lives on long after that fabulous last sentence which made my blood run cold.

Best Read With...a platter of cut bread and cheese and a mug of ale

Beth Underdown lectures in Creative Writing at the University of Manchester. Her first novel, The Witchfinder's Sister, is based on the life of the 1640s witchfinder Matthew Hopkins. Beth's interest in seventeenth-century England was sparked by the work of her great-uncle David Underdown, one of that period's foremost historians. She came across a brief mention of Matthew Hopkins while reading a book about midwifery, igniting an interest which turned into an all-consuming hunt for the elusive truth about this infamous killer.