Review ~ The Undertaking by Audrey Magee 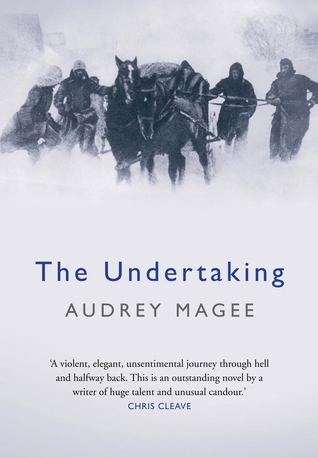 Honeymoon leave and the security of a war pension are all that entices Peter Faber and Katharina Spinell to marry. The couple have never met, but war time creates strange bedfellows and Peter desperate for a reprieve from the horror of the Eastern front is willing to take this unseen woman as his wife. Arriving in Berlin in the autumn of 1941 for ten days leave, Peter and Katharina attempt to forge some kind of relationship, they discover that their immediate and powerful sexual attraction offers them a brief respite from the immediacy of war.

What then follows is the story of Peter’s struggle in horrendous conditions as he and his fellow soldiers embark upon the German offensive against Stalingrad. Katharina remains in Berlin, where she and her parents enjoy the protection of a powerful Nazi family; however, they soon discover that this wartime security comes with a high price to pay.

The story is predominantly written in the form of dialogue, which allows an intimacy between the reader and the characters thus allowing their voices to be heard in eloquent detail. There is no room for sentimentality in wartime and The Undertaking clearly describes the true horror of war, from the grim uncertainty of relentless and all consuming violence, to the insecurity and utter despair of living life stripped of all its compassion.

Overall, this is a commendable and powerful debut novel. I am sure that The Undertaking will be one of those books which will be of immense interest to book groups; there is much to discuss, not just about the German involvement in the Russian offensive ,but also about the morality and principles which govern wartime behaviour.