Review ~ This Dark Road to Mercy by Wiley Cash 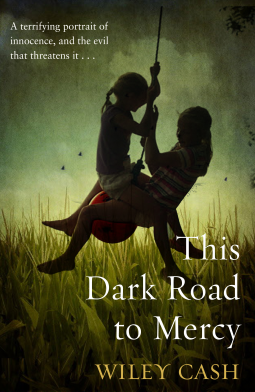 As the story opens, twelve year old Easter and her six year old sister, Ruby live in foster care following the unexpected death of their mother. Their short lives have been blighted by unpredictable and capricious behaviour and even living in a state owned facility does nothing to allow them the comfort of normality. Their errant father, Wade, a washed up minor league baseball player, appears back in the girl’s lives; ostensibly to take care of them, but having once signed away his rights to his daughters, the authorities now take a grim look at his behaviour and refuse his request, reasoning that his demand is not entirely in the girls’ best interest. Unaccustomed to taking no for an answer Wade decides that he’s just going to damn the consequences, and take them anyway. However, Wade is about to discover that this is easier said than done, especially as Brady Weller, the state appointed guardian is on hot on his case, along with Robert Pruitt, a vengeful and volatile man who has his own score to settle with Wade.

The story is told by three very different narrators, namely Weller, Pruitt and Easter who each have their own distinctive way of making the story come alive. Ultimately, it’s the story of a broken family, who have been shattered into pieces by broken dreams and long forgotten promises. Easter’s character is sensitively portrayed, she is a child who is way too old, and yet speaks with a poignant authority as she stands up for herself and Ruby. Wade is a profligate mess, a petty criminal who is deeply immersed in both regret and ruined ambition. We know him through Easter’s narration and his deeply personal story of reparation, redemption and broken dreams acts as a tragic warning.

“Why are you here?” Easter demands.

“I just want to spend some time with you and your sister.”

There is no doubt that the author has captured this bleak and rather dark look at unconventional family relationships and captures the very heart and soul of dark despair but counteracts it with delicate acts of compassion, which demonstrate that it is indeed a dark and often lonely road to mercy.

My thanks to NetGalley and  Random House UK, Transworld Publishers for my copy of this book.