Review - Where the Bodies are Buried by Chris Brookmyre

Where the Bodies are Buried by Chris Brookmyre 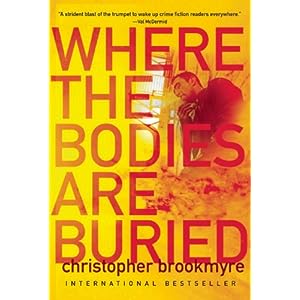 
This introduction to a new Scottish crime series gets off to a good start with an interesting array of characters, and fine attention to detail. The mean and moody streets of Glasgow are portrayed with the confidence of someone who knows the city well, and even though there is an apparent fondness for the place, there is also a realisation that an underworld of criminal activity skulks beneath the surface. There are some clever twists and turns in the plot, which together with a few red herrings combine to make a well controlled crime investigation. Brookmyre has a very individual style, which can take a while to get used to, but his ability to raise the tension never fails to engage, and his acerbic wit adds a quality dimension, to what is essentially an interesting crime story.
As with all first books in a new series, there is an element of getting to know all the characters, some are obviously in it for the long haul, whilst some peripheral characters may disappear without any further trace. Overall, I thought that this first book was a promising start to a series which will develop over time. The potential for success is certainly apparent, and Brookmyres army of fans will not be disappointed in this new direction.

My thanks to NetGalley and Grove Atlantic for an e-copy in advance of publication.