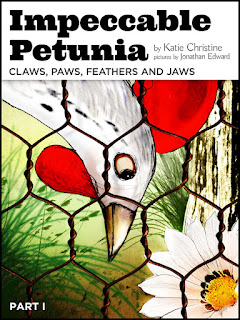 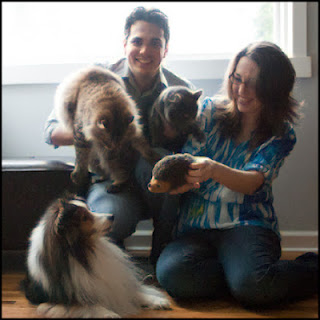 Katie and Jonathan -  A huge welcome to both of you to jaffareadstoo, and thank you so much for taking time out of your busy schedule to answer a few of our questions.

Where did you get the inspiration for Impeccable Petunia?

There's a line in the first chapter, "Science tells us that chickens can see many more colors than humans." It was from an article Jon, my husband and illustrator, read one day and that's where I got the idea. It started as a little one-page short story and grew from there.


Inspiration for the series comes from everywhere: people I know, places I've been, my animals, our house, our garden, books, movies, tv shows. In one scene, Macy, the cat, decides the harass the chickens by shaking the chicken coop. The impetus for that scene came from our little kitten, Penelope, who would hurl herself onto the cat scratch post, cling with her claws and proceed to shake it side to side while yowling at the top of her lungs.


What comes first – the story, or the illustrations?


The story comes first and then the illustrations when there's a pretty solid manuscript to work from. Jon has really brought everything to life! I have ideas for all the characters in my mind's eye and he's managed to capture them perfectly.

Both. I write stories that I would like to read and hope that other people would like to come along on the journey with me. I try to make things as straightforward as possible while keeping a little mystery. I love writing these characters and I hope readers will enjoy them too.


Your writing appears to be very intuitive – which authors have inspired you?

Growing up, my favorite books were Matilda, by Roald Dahl and A Cricket in Times Square by George Selden. I loved powerful stories painted with vivid imagery and laced with whimsy and humor. As an adult, I've most enjoyed books by Gore Vidal, James Clavell and Helen Fielding.


The Illustrations are beautiful – what gave you the inspiration?
Those are all Jon's work, so I'll let him answer:

The random factoid (chickens can see more colors than humans) that inspired the series as a whole also inspired the illustrations. I wanted images that were very bright and colorful, regardless of the dark thematic turns. My idea was to incorporate a sense of realism to help anchor the story in a believable reality balanced by cartoonish facial expressions to convey all the-bigger-than-life emotions that the chickens and cat experience.

As the story is about the animals, the point of view of is almost always close to the ground so the vantage is always from an animal's perspective. You never see anything of Silkie, the main human character in the story, aside from her shins. I lifted this idea from the old Muppet Babies tv cartoon where you only saw the Nanny's shoes and striped socks.


Which children’s book do you wish you had written / illustrated, and why?

I have always been in awe of the book Animalia by Graeme Base. The little poems for each letter of the Alphabet are very clever and its illustrations are like none other.

Can you tell me about any future projects?


We're furiously working on the next installment of Impeccable Petunia which will be called, A Tale of Two Tails.

Katie and Jonathan  - Thank you so much, it has been an honour to have you visit jaffareadstoo.

We wish you continued success with Impeccable Petunia, and look forward with great anticipation, the publication of A Tale of Two Tales.

Sphere 18 March 2021 My thanks to the publisher for my copy of this book After losing her mum in a tragic accident, Chrissy Moss fought to s... 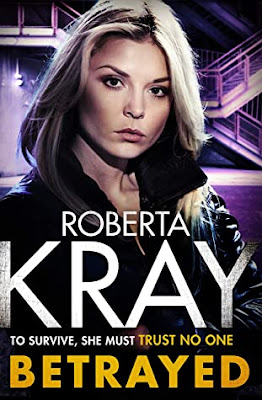