Blog Tour ~ The Secret of the Château by Kathleen McGurl

Everything is about to change

Pierre and Catherine Aubert, the Comte and Comtesse de Verais, have fled the palace of Versailles for their château, deep in the French Alps. But as revolution spreads through the country,even hidden away the Auberts will not be safe forever. Soon they must make a terrible decision inorder to protect themselves, and their children, from harm.

When Lu’s mother dies leaving her heartbroken, the chance to move to a château in the south of France with her husband and best friends seems an opportunity for a new beginning. But Lu can’t resist digging into their new home’s history, and when she stumbles across the unexplained disappearance of Catherine Aubert, the château begins to reveal its secrets and a mystery unsolved for centuries is uncovered...

When five friends, all in their fifties, decide to pool their collective resources and relocate, from England, to a shared property in rural France, they discover the beautiful Château d'Aubert in the tiny town of Saint-Michel-sur-Verais in the Alpes-Maritime region. The château is very picturesque, but with some areas that need renovating, the five set about transforming the château into a stunning home. However, as with all old buildings there is much to discover and the air of mystery, and occasional ghostly feelings which surrounds the château, draws them ever deeper into its history.


Told in alternate chapters we get the modern day story of the château as seen through the experiences of Lu, once a history teacher, who is fascinated by the history of the château which stretches back to the tumultuous days of the French Revolution. Throughout the story we get to learn more about complicated lives of Pierre and Catherine Aubert, Comte and Comtesse de Verais, who fled Versailles when the troubles escalated into danger and despair. However, they soon discover that escaping to the Château d'Aubert is not without its problems.

I was equally at home in the modern day château as I was heading back in time to the days of the terror and the collapse of the ancien regime. The author describes everything so beautifully that time and place come alive and as one chapter ended I found that I was looking forward to either returning to the present with Lu, and the gang, or of heading back to the past to see how Pierre and Catherine were faring.

The Secret of the Château is a beautifully written dual time narrative which takes you back to a dark period in French history and a time when to be a privileged aristocrat was fraught with danger. It was interesting to watch just how the historical strands of the story played out whilst at the same time allowing the modern day protagonists to bring the history of the château back to life again.

History, mystery and a hint of ghostly activity make The Secret of the Château a perfect 'Lock down' sort of read 😊 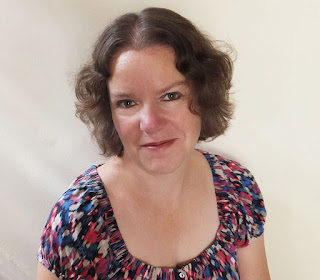 Kathleen McGurl lives in Bournemouth with her husband. She has two sons who have both now left home. She always wanted to write, and for many years was waiting until she had the time. Eventually she came to the bitter realisation that no one would pay her for a year off work to write a book, so she sat down a nd started to write one anyway. Since then she has published several novels with HQ and self published another. She has also sold dozens of short stories to women's magazines,and written three How To books for writers. After a long career in the IT industry she became a full time writer in 2019. When she's not writing, she's often out running, slowly.