Honoured to be part of this commemorative edition

New York Times and Sunday Times bestseller. Finalist in Goodreads 2015 Book of the Year, and the Elle Grand Prix de Lectrices in France. Nominated for the US National Jewish Book Award. Published in 22 countries and translated into 16 languages.

Among the millions of Holocaust victims sent to Auschwitz II-Birkenau in 1944, Priska, Rachel and Anka each pass through the concentration camp’s infamous gates with a secret. Separated from their husbands, strangers to one another, they are newly pregnant, alone, and terrified. With so many loved ones already lost to the Nazis, these three young women are privately determined to hold onto all they have left – their lives and those of their unborn babies.

Born Survivors follows the mothers’ incredible journey – first to Auschwitz, where they come under the eagle-eyed scrutiny of Dr. Josef Mengele, the ‘Angel of Death’ who asks each of them, “Are you pregnant, pretty woman?” then to a slave labour camp where they are half-starved and virtually worked to death. Struggling to hide their condition as the Allies close in, they are finally sent on a hellish 17-day train journey with thousands of other prisoners to the Mauthausen death camp in Austria

That the gas chambers ran out of Zyklon B just after the three babies were born within days of each other and in unspeakable circumstances, is just one of several miracles that allowed all three mothers and their sickly 3lb infants to survive. Against all the odds, the women brought home their babies and managed to rebuild their lives after World War II, in spite of continuing prejudice and anti-Semitism that led them to flee variously to the United Kingdom, United States and Israel. These once educated, articulate and intelligent women all raised in happy, wealthy families had married for love, but lost their husbands and most of their families to the Nazis.

Their miracle children - two girls and a boy named Hana, Eva, and Mark - went on to have children of their own, all of whom continue to live their lives in defiance of Hitler’s plan to erase them from history. Sixty-five years after the Americans freed them, they met the others for first time at Mauthausen on the emotional anniversary of their liberation. All only children, they have become ‘siblings of the heart.’

It's difficult to know where to start with this account of the ordeal that these three brave women went through and of the sheer determination and bravery shown in the most horrific of circumstances. Any words of mine will fail to do justice to this powerful account of survival against all odds.

I have read several books throughout the years about the Holocaust and the horrors inflicted on the Jewish population during WW2, and they have all left a lasting impression but none more so than Born Survivors which, I must admit, gave me sleepless nights, and a profound horror at man's inhumanity to man, or, in this case, to its fertile women.

Three women, Priska, Rachel and Anka each with a detailed story which tells of hardship, deprivation, cruelty and horror on a scale we, 75 years later, can never begin to imagine. Torn from their families, and husbands, in the latter years of the war and taken first to Auschwitz, they come under the scrutiny of a vicious regime which offered neither hope, charity nor any sort of human kindness, and where their initial contact with the notorious 'Angel of Death', Dr. Josef Mengele, opened with the same question, "Are you pregnant, pretty woman?". A question which made my blood run cold.

I have to say that I read most of this book with a huge lump in my throat and cried so many tears I was in danger of running out of tissues. As a mother, and a grandmother, I can only try to imagine what each of these mothers' went through in order to carry a baby, and nurture it for 9 months, when they themselves were starving and ill used, and then to give birth in horrific circumstances, not knowing if they and their tiny little babies, weighing less than 3lbs, would be sent to their deaths.

The author brings Priska, Rachel and Anka alive in the imagination. She gives them back a voice that was so sadly taken away from them and shows how the power of fortitude, and the sheer strength of the human spirit to survive, can never be diminished, or under-estimated.

The story of these survivors, how the three babies went on to share a common bond as‘siblings of the heart’ is a heartbreaking account of what it means to them to be Born Survivors and it is a timely reminder to us that we should never take what we have for granted.

WENDY HOLDEN is a former journalist and war correspondent who has written more than thirty non-fiction titles, most of which feature inspirational women and many of them international bestsellers. They include Tomorrow to Be Brave about the only woman in the French Foreign Legion (soon to be a film); Behind Enemy Lines about a French Jewish spy in WWII (now an award winning documentary), and Till the Sun Grows Cold the story of a British woman caught up in the Sudanese war. She lives in Suffolk with her husband and two dogs.


The special commemorative edition of Born Survivors by Wendy Holden, which includes new material, is published by Sphere (r.r.p. £8.99) 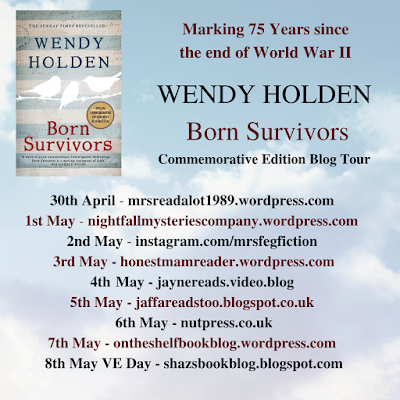