Suppose Roma Nova, the last remnant of the old Roman Empire, had struggled through to the 21st century – a tough little country with tough, resourceful people?

Apulius, a young tribune sent to a backwater in 370 AD for having the wrong religion, encounters the fiery Julia.

What does his lonely descendant, Silvia, labouring in the 1980s to rebuild her country, make of the Italian architect supervising the reconstruction?

Can imperial councillor Galla stop the Norman invasion of England in 1066?

And will Allegra, her 21st century Praetorian descendant fighting her emotions, find her way to her own happy ending?

There's something quite intriguing about reading a set of short stories which have links to a book series which has really captured my imagination. Roma Nova Extra does all that is good in short story writing, which is to share enough information so that new readers can be lured in and encouraged to find out more, whilst at the same time allowing those who are familiar with the novels, to find something new to enjoy.

There is no doubt that this author has made the complicated world of Roma Nova come alive, from its original concept in the novel, INCEPTIO and now through to ROMA NOVA EXTRA this set of short stories cleverly combines a blend of past, present and future. The power and inherent danger of ancient Rome combined with an altogether alternate way of looking at history captures the imagination with both clever story-telling and wonderful characterisation.

It’s always a real treat to scurry back to the Rome of this author’s imagination, and in the first short story, of ROMA NOVA EXTRA, I was delighted to find myself in AD 370, an innocent bystander at the meeting of Roma Nova’s founders, in a clever little story about a girl in a marketplace. Throughout the collection, there are lots of lovely touches, and I won’t give any of the game away by recounting too much, however, I was delighted to find that the author’s alternative 1066 story, which was previously published in a collaboration with other historical fiction writers, 1066 Turned Upside Down, also finds its worthy place in this collection.

Roma Nova Extra is a new venture into the world of short story writing by this clever author and I am sure that it will act as a tantalising taster into the fascinating world of Roma Nova.

By clicking here you can read a guest post by Alison Morton about how she overcame her fear of writing short stories. 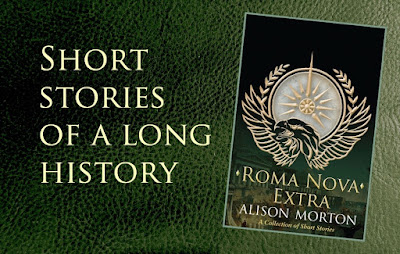