Caroline Walker’s daughter suffers a horrific riding accident. Her distraught parents wonder if she’ll ever walk again, let alone ride. And when Mollie’s blood group is discovered as rare, her husband offers to donate blood. Except Ian is not a match. In fact, it’s unlikely he’s Mollie's father.

Caroline turns to Rory’s friend Connor; and although his almost spiritual connection with his horses appears to be the balm she needs, Caroline cannot forget Rory, or her youth – both lost to a man she never loved. Eighteen years on and after surviving cancer Rory lives as a virtual recluse in the Welsh mountains. Through his well-meaning but interfering sister, he is shocked to discover he has a teenage daughter. Or does he?


I have a few writers in my arsenal of "go to" authors, those whose stories I know will never disappoint, and this author is definitely one of those who I know will never let me down and, her latest novel, Gift Horse certainly ticks all the right boxes.

Caroline Walker's daughter has a dreadful accident at a riding event, a trauma which acts as catalyst for what follows in the rest of the story. Flipping effortlessly between past and present, the story gradually emerges of something which happened in Caroline's past, a youthful indiscretion, which will have repercussions far into the future.

The story flows beautifully, not just around the characters, but also of the landscape around it. People and places merge, delivering a story of a traumatised girl on the road to recovery, the emergence of secrets long buried, and of the devastating consequences of the truth being revealed.

There's such a powerful connection to the characters that you can't help but form an emotional bond with them, some I liked more than others, and yet, they all bring an overall strength to the story, particularly, Connor with his tender care of the horses at the therapy centre, Rory with his laissez-faire attitude to life, and Ian, Caroline’s husband, who brought some powerful anxieties of his own into the story. Throughout the whole of journey is Caroline, fighting her own particular demons with a reserve of character which, I think, we would all like to have. I enjoyed her company immensely and hoped that everything would eventually work out for her and her family.

I read Gift Horse quickly over the space of a few hours, not because it was light on content, far from it, but because once started, I really couldn’t put the book down and needed to keep turning the pages until I knew just how the story would eventually play out. And yes, there were a few tears at the ending. 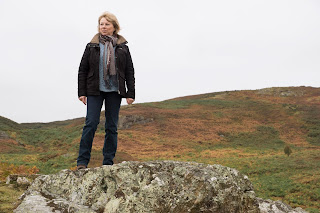 Jan Ruth lives in Snowdonia, a mountainous area of North Wales, UK. Jan writes contemporary fiction about the darker side of the family dynamic, often blending life in rural Wales with a touch of city business. Her style is best described as fast-paced and realistic, with a sprinkling of dry humour.

Jan is also an active member of her local RDA group (Riding for the disabled) and is an Assistant Equine Facilitated Learning Practitioner for the Welsh Institute of Therapeutic Horsemanship. In her spare time she enjoys riding and walking the Welsh hills; a constant source of inspiration. 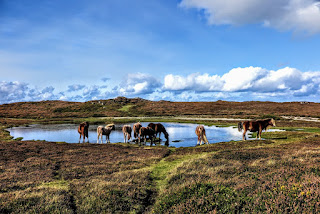 Jan’s books are available globally via Amazon in paperback and for Kindle; and locally, you’ll find them in North Wales libraries and Hinton’s bookshop of Conwy.