📖 His Fic Saturday Blog Tour ~ Over the Rainbow by Katie Flynn

Liverpool 1939: Olivia Campbell appears to have the perfect life. However, behind closed doors she lives in constant fear of her abusive father, and has no support from her mother…
Longing for love and affection she begins a relationship with Ted, a young lad who works in her father’s factory. But her family disapprove of the relationship and forbid them from seeing each other.
When war comes to Liverpool, Olivia seizes the opportunity to leave behind her unhappy life and join the WAAF. There she meets a fellow trainee, Maude and the two embrace their newly found independence. Soon Olivia meets the handsome Ralph, and all thoughts of Ted are brushed aside. Until he returns to her life with some shocking news that turns her world upside down...
My thoughts..
Olivia Campbell and Ted Hewitt meet and fall in love as young teenagers but their different social circumstances in Liverpool are against them and once Olivia's factory owner father discovers their relationship he does all in his power to break them apart.
What then follows is a conclusion to the Liverpool Sisters Trilogy which began with Liverpool Daughter and Under the Misteltoe and whilst all three novels may be read as standalones there is no doubt that they are better enjoyed as a set, particularly as Over the Rainbow brings the trilogy to its final conclusion and ties up several loose ends.
I loved reading Olivia and Ted's story as both are such interesting characters but I think in Olivia the author creates a worthy heroine. She is feisty and determined in the face of such adversity that it's impossible not to warm to her story. Setting the book in Liverpool, in the years leading up to, and during the Second World War, gives the story a strong sense of historical authenticity, especially when Olivia later joins the WAAF, working with a group of like minded strong and determined women.
It's been interesting to see how all the strands of this trilogy finally come together and as the story finishes I felt a sense of completion as everything had come full circle. Beautifully written by Holly Flynn who has now taken up her mother's writing mantle, Over the Rainbow is a thoroughly enjoyable historical saga which held my attention right from the start.
*Included in the bonus content is a rather yummy sounding recipe for Chocolate Brownies which I hope to try before too long 😂
About the Author
Katie Flynn is the pen name of the much-loved writer, Judy Turner, who published over ninety novels in her lifetime. Judy’s unique stories were inspired by hearing family recollections of life in Liverpool during the early twentieth century, and her books went on to sell more than eight million copies. Judy passed away in January 2019, aged 82.
The legacy of Katie Flynn lives on through her daughter, Holly Flynn, who continues to write under the Katie Flynn name. Holly worked as an assistant to her mother for many years and together they co-authored a number of Katie Flynn novels, including Christmas at Tuppenny Corner.
Holly lives in the north east of Wales with her husband Simon and their two children. When she’s not writing she enjoys walking her two lurchers, Sparky and Snoopy, in the surrounding countryside, and cooking forbidden foods such as pies, cakes and puddings! She looks forward to sharing many more Katie Flynn stories, which she and her mother devised together, with readers in the years to come.
Twitter @ArrowPublishing
#OvertheRainbow 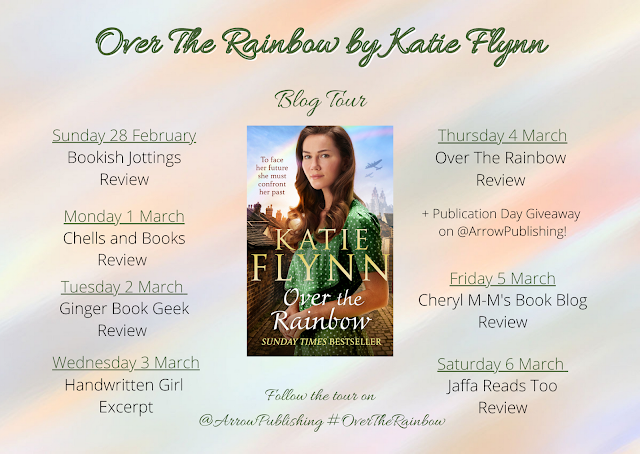