When nineteen year old Gwendolyn Hooper steps of the steam ship in Ceylon, she is excited to start married life with her handsome husband, Laurence. Life on the remote tea plantation is very different from her life in England, but Gwen is determined to make the most of her new life. Totally in love with Laurence, Gwen is puzzled when he appears to become secretive and distant and quite unlike the man she fell in love with, and added to the marital discord, is the appearance of Laurence's younger sister, Verity, whose bizarre possessiveness towards Laurence, makes it difficult for Gwen to be accepted as mistress of her own home.

Captivated and enthralled from the very start of the novel, I quickly became immersed in plantation life and saw that Gwen’s rather naïve outlook on life would make for compelling reading. Idealistic and filled with only kindness, Gwen tries to make sense of this rather archaic way of life and even though she doesn’t fully understand the running of the plantation, she is determined to make a difference. The story is beautifully written, with a true sense of time and place, and brings to life, not just the social history of Ceylon but also the fundamental changes which were happening towards the end of colonialism in the 1920s and 1930s. From the decadent house parties of the late 1920s, to the abject poverty of the plantation workers, I felt like I had stepped into Gwen’s shoes and experienced everything as she saw it. I wore her sumptuous flapper dresses with their beads and fripperies, and strolled with her and Laurence through the cool of the evening towards a lake where sparkled light glistened and danced.

The Tea Planter’s Wife is a story about contrasts, about what is right and proper, and of the great price paid by adhering to social and cultural expectations. It’s also about secrets and lies, of the huge burden of culpability and of the hidden dangers of deceit and overwhelming sadness. After reading this author’s previous book, The Separation, which I absolutely loved, I had misgivings that this one wouldn’t live up to expectations, but I am delighted to say that this book exceeded all my hopes. I was beguiled, immersed and completely overwhelmed by the power of the story and of my emotional connection to it.

A perfect accompaniment to a delicious cup of Ceylon tea, The Tea Planter's Wife is without doubt one of my reads of the year...

I am delighted to say that The Tea Planter's Wife has been picked as one of the Richard and Judy book club Autumn reads. 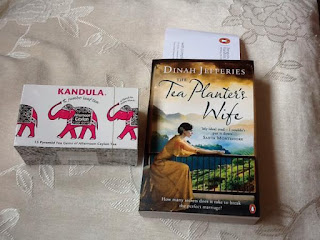